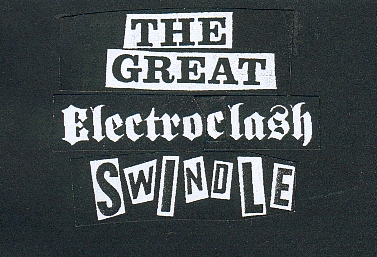 I wrote in summer 2002 a text called 'The Great Electroclash Swindle' which received a lot of attention around the world. Basically it was a satirical bite inspired by Piers Martin's article in Muzik, which celebrated electroclash as the biggest dance music fad in 2002. Electroclash received a lot of flak from "original" electro fans who thought it was derivative "fake music" for trendies and wannabe hipsters. New York promoter Larry Tee who used to run the Electroclash music festival in Williamsburg got his share of bad-mouthing and changed the fest's name to the Outsider Music Festival. Since then electroclash has been both forgotten as new musical fashions have replaced it and at same time not forgotten since it seems to have been established as a musical genre name for certain combinations of new wave/synthpop/electro/techno/disco/whatever. For example, the Juno site in UK for new dance music releases has "electroclash" as one its categories.

In my article I mentioned Munich's International Deejay Gigolos label as one of the examples representing this controversial genre. The circle seems to have closed since the label has now released a mix album called The Great Gigolo Swindle. Heh, it's great to have been of inspiration!

[Addition, August 2005 -- Well, not actually: here is a correction Steve Teeri wrote to this text.]

Philip Sherburne Reconsiders Electroclash
TokTok vs. Soffy: "A true electroclasher is against electroclash"
Posted by pHinn at 1:21 PM
Labels: electroclash