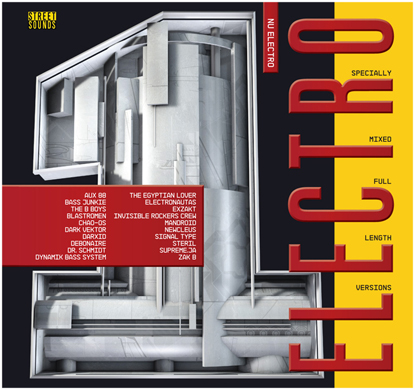 Street Sounds was the UK label responsible for the classic Electro compilations of the 80s. The label is now revived by its founder Morgan Khan, and their forthcoming compilation of the new skool of electro artists looks extremely promising (for pHinnWeb interest, there's also a track from Finland's Blastromen). 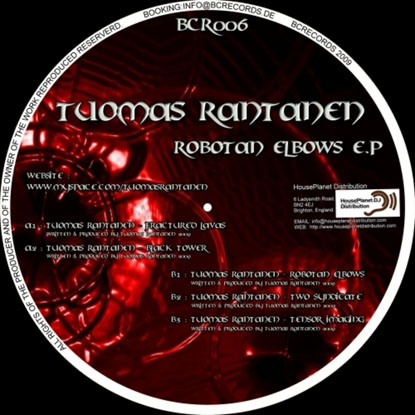 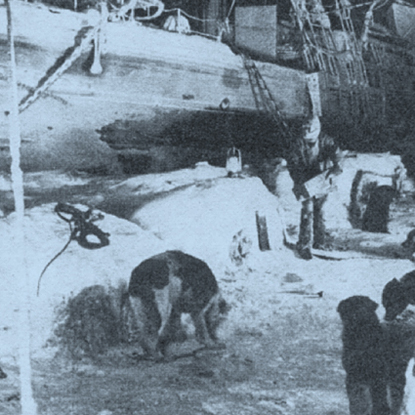 The release in fact includes very close to everything they have recorded during the last 6 or so years (except for that one track released under the alias Detox, on the now sadly defunkt Kommando 6 label back in 2004). A remix by Vince Koreman (of Ra-X and Virgin Fang fame), exclusively commissioned for this release, is also included.

Posted by pHinn at 2:17 PM No comments:
Labels: Latvia, Swaeg

British writer J.G. Ballard died on Sunday 19 April 2009. Ballard, who had been diagnosed with prostrate cancer in June 2006, was 78 years old. Among his best-known novels are such as Crash, High-Rise, Empire of the Sun, and Super-Cannes.

Though usually cited as a science fiction writer (he was one of the vanguards of the "New Wave" of sci-fi coming into prominence in the 1960s with such celebrated magazines as New Worlds, which he also contributed), Ballard's main theme was the psychopathology of contemporary society. The writer inspired by French Surrealists of the early 20th century, Ballard's works usually were about the civilisation crumbling but also mutating into something else, creating its own beauty and serenity. His psycho-geographical landscapes were inhabitated by alienated but inquisitive characters obsessed by a combination of technology, celebrity cult, sex and violence; all of which they worshipped with a religious fervour and even some sort of strange dignity.

Crash (1973) is about a small cult of people sexually obsessed with becoming injured or even dying in car accidents, preferably featuring some celebrity figures such as Elizabeth Taylor. Concrete Island (1974) describes a modern-day Robinson Crusoe, who finds himself helplessly stranded on a traffic island in the abyss of a spaghetti junction, his pleas for help ignored by passing cars. As with film director Luis Buñuel, Ballard's works could often be seen as surreal satires of the "discreet charm of bourgeoisie", and High-Rise (1975) shows a group of people consisting of highly-paid professionals and inhabiting an ultra-modern tower block degenerate into a constant life of violent orgy. In The Unlimited Dream Company (1979) an aviator crashes his plane in a suburb town of the Thames Valley, becoming a sort of Messiah with supernatural powers in a tale which might be or not only a final fantasy of a dying man. Ballard's late quadrology Cocaine Nights (1996), Super-Cannes (2000) (these two being actually companion pieces, so similar they are in their themes), Millennium People (2003) and Kingdom Come (2006) also show these same upper-middle class people instigating absurd violence to alleviate the boredom and social friction in their tightly guarded resort communities, business parks and shopping malls.

In a perfect world, the Nobel Award for Literature would have been Ballard's, but science/speculative fiction has never really fitted the appetites of that venerable election committee, not to speak about the controversial nature of his works. It would perhaps be preposterous to call Ballard's works prophetical, but I'm quite sure in the years to come more and more resonance will be found with his works and how the world around us turns out to be. No, as it already is: Ballard's dystopias took place not in some far future or a faraway country, but here and now.

In popular culture, J.G. Ballard has been for years a hip name to throw around and his works have inspired countless other writers, film-makers, artists and musicians. Empire of The Sun, an autobiographical book on Ballard's childhood years in the Japanese-occupied Shanghai, was filmed by Steven Spielberg in 1987. The Crash film version by David Cronenberg (whose earlier works such as Videodrome had a definite Ballardian tone) stirred some controversy in 1996.

Daniel Miller, the founder of Mute Records, recorded in 1978 under the alias of The Normal 'Warm Leatherette', a song based on Ballard's Crash. The Normal's electronic contemporaries such as Gary Numan ('Down In The Park') and John Foxx (Metamatic) have read their Ballard, too. Joy Division's late frontman Ian Curtis took the name for one of their songs, 'The Atrocity Exhibition', from a short story collection of Ballard.


The Normal: 'Warm Leatherette' with film clips from Crash adaptation by David Cronenberg

Hot on the heels of the majestic double A-side "Black Ken/You Clapper" (DCR93) comes this double-sided slab of divergent disco music from The Emperor Machine that further showcases the forthcoming new album Space Beyond The Egg, which is due out on June 1st.

Title track 'Kananana' is a searing pop oddity replete with murmurous vocals and swinging guitar licks. It ebbs bit by bit into the mind of the listener, gradually imbuing a weird sense of vacant bliss alongside a swelling emotional charge -- this is a new strain of mutated pop genius! With a remarkable video by the esteemed Cassiano Prado and Guilherme Marcondes of Celebro Productions coming very soon, this one is set to perhaps the greatest cosmic utterance from The Emperor Machine
yet.

In contrast to this fuzzy cloud of pure joy is the wholly explicit B-side 'Snatch Shot (Extended Version)', a meditation through music on the transcience of modern copulation. Dark and warm, compelling and confounding by turn, this one will leave you panting and slightly nauseous.

This single will be followed by a new assault from The Emperor Machine Live!

Title track 'Fly Vision' is a monstrous arrangement of funked-up genius that features a super-heavy bassline, a howling vocoder and diverse ensemble of pots and pans. This is P-funk for the new millennia! 'Fly Vision Reprise' takes these pots and pans (and adds a cardboard box) to make a fully percussive two minutes of rhythmic fury -- a perfectly formed DJ weapon to use with or without the original.

Third track 'Torque' is a more stripped-back affair, seismic with bass and frantic with go-go rhythms. This is a truly deviant groove that will cook the party!

These track represent the second installment from Arcadion and will hint at the size of things to come in Arcadion's forthcoming album due later in 2009...

Posted by pHinn at 2:13 PM No comments:
Labels: Scott Walker 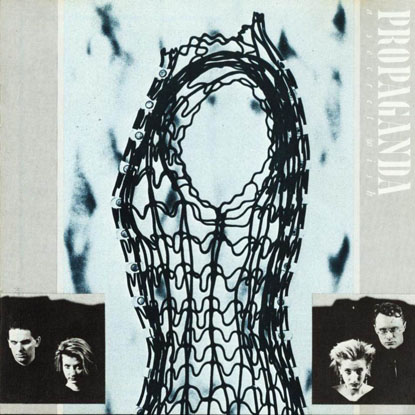 
Propaganda: 'Dream Within A Dream'

Lately I've been re-listening to A Secret Wish by Propaganda, a German synthpop act, who released the album in 1985 on ZTT Records, the infamous UK "artpop" label of Frankie Goes To Hollywood, Art of Noise and Grace Jones fame.

With the Cinemascope-size production by Stephen Lipson and Trevor Horn (THE producer guru of the era), the album is a perfect example of the 1980s megalomania as personified by ZTT (short for Zang Tumb Tumb, a name taken from Marinetti's Futurist poem): melodramatic, pseudo-arty, overproduced and quite enchanting.
Posted by pHinn at 12:29 PM No comments:
Labels: 1980s, electropop, Germany, synthpop, ZTT Records

The Emperor Machine: Space Beyond The Egg

Exquisitely simple, yet enormously complex, the egg is one of nature's marvels. It is one of the most nutrient dense of foods yet one of the most inexpensive food sources of complete protein available on the planet Earth. What then should we expect
from an egg that hasn't come from Earth but from outer space? Science fiction has attempted to fathom this questions in numerous ways over the years, with often absurd and ridiculous results! In truth it has taken a man from Stafford to realize the true nature of the cosmic egg, and indeed, look no further than its perfect mottled surface, into the abyss that we cannot name, but can in fact listen to...

That man is Andy Meecham, a stalwart of sonic mongering that has travelled a long and deviant road through numerous musical incarnations to get to this point. From the childlike innocence of Bizarre Inc, to the adolescent fury of Chicken Lips, Meecham has passed through these guises and arrived, fully formed at last, as The Emperor Machine. Previous albums Aimee Tallulah Is Hypnotised (2004) and Vertical Tones And Horizontal Noise (2006), as well as more than a dozen singles and countless remixes (from Mark Ronson to Moby, Daft Punk to Franz Ferdinand) have helped refine and smooth his imperial vision, not to mention the numerous live shows all over the world since the inception of the live Emperor Machine last summer. All of this has lead to this moment, his third full-length album, which shall henceforth be known as Space Beyond The Egg.

The Egg itself can be split into many parts. From album opener 'The Frontist' -pregnant with menacing funk, to the droopy and lead-footed disco of 'Hairy Knuckle'; the mantric swing of 'Kananana' with its lethal vocal hook, to the strange amniotic cascades of 'Silvercape', not to mention the lurking deviant that is 'Dave Gent' or the Afro-cosmic reverie of 'You Clapper'. Attempting to describe these tracks in words is, of course, academic and irrelevant when compared with the actual listening experience. Put quite simply, this is music for your insides that will help you turn you inside out. This is the sound of the dream of whatever it of whatever it is that lies inside the egg: its near-perfect conception of the space beyong. Enter that space with the help of The Emperor Machine...

Coming soon from The Emperor Machine:

Following this release will be a special limited edition album of alternate versions: Space Beyond The Egg - The Embryo, which will include remarkable collectable artwork by La Boca.

The Emperor Machine will begin a tour of selected live dates across the globe on 5th June 2009. More details to follow... 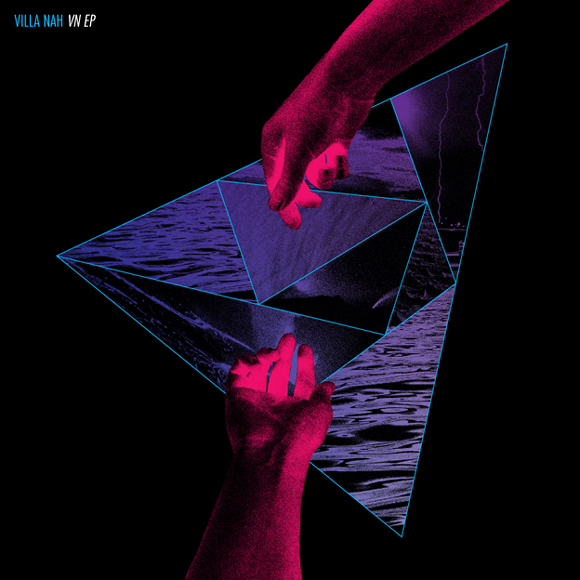 Keys of Life, a sublabel of Helsinki's Sähkö Recordings announces a new release by Villa Nah, an electronic duo by of Juho Paalosmaa and Tomi Hyyppä; comparing them to such early-80s synthpop luminaries as Heaven 17 and New Order. Also Jori Hulkkonen lends his production skills. More info at press releases notes @ Sähkö Recordings.

Villa Nah will appear this Satuday at Vanha Yo-Talo (the Old Student House) in Helsinki:

The club takes place in the Bar of the Old Student House (Helsinki) and features a rare performance from the pioneer of Finnish electronic music, Op:l Bastards - who made an impressive return at the 2007 Flow Festival - as well as the retro-tinged, warm synth electro of the duo Villa Nah. DJ Esko Routamaa will be spinning records during the night.

In addition to the live music and the DJ, the IHME Club programme includes a visual dimension in the form of a cross-artistic performance executed by the Association of experimental electronics, who create musical machines from electronic junk and walk the tightrope between chaos and order. The IHME Club programme is designed by the artist Tommi Grönlund, the founder of the record label Sähkö Recordings.

Admission to the IHME Club is free. Tickets are limited - ensure your admission to the club by picking up your tickets beforehand between 30 March and 3 April at the location of Antony Gormley´s Clay and the Collective Body; the Kaisaniemi field, Kaisaniementie street 1-3. Once the IHME Days are underway on Friday, 3 April, tickets can be collected at the information desk of the Old Student House. Two tickets per person.
<<<<<

... can be found here. Sorry elitists, no cool limited edition 12"s this time, either; have no money, so again, it's just all old fart CDs from local library. Plus some cool promos; thanks, DC Rec.! And you know what, day by day I'm becoming more like Snake Plissken and don't really care.