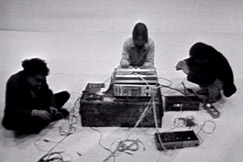 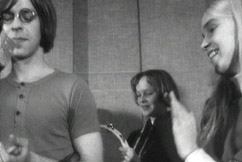 Those Lovely Hulahands
YLE, Finnish Broadcasting Company, runs these days on their Website a huge archive of old video and soundclips, spanning the last hundred years of news events, politics, culture, entertainment, education and popular culture in Finland and around the world from a Finnish point of view. Called Elävä Arkisto ("The Living Archive"), at the time of writing this, 2618 audiofiles and 2343 videofiles can be found there. (Unfortunately for you non-Finns, most of it is in Finnish language only.)

Some excerpts from Elävä Arkisto (thanks for the tip to Jukka Lindfors):

Sähkökvartetti ("The Electric Quartet") was a late-60s electronic instrument for multiple players, built by Erkki Kurenniemi, an undisputed pioneer of electronic music in Finland. During live performances Sähkökvartetti was operated by the underground luminaries Tommi Parko, Peter Widén and Arto Koskinen, and as the vocalist was the legendary M. A. Numminen. Sähkökvartetti appeared at an international youth festival in Sofia, Bulgaria in 1968, created quite a havoc with their sonic anarchy ill-fitting to the official agenda of Socialist youth culture, and were subsequently banned from the festival. There is in existence only one remaining Sähkökvartetti song, 'Kaukana väijyy ystäviä' ("Far away lurk friends"), which has been featured on various compilations and M.A. Numminen's retrospective albums. Elävä Arkisto has here Sähkökvartetti's only performance on TV and also M.A. Numminen reminiscing this project in an audio interview.