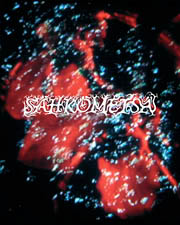 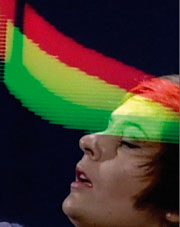 A newly released book Sähkömetsä - Videotaiteen ja kokeellisen elokuvan historiaa Suomessa 1933-1998 ("Electric Forest - The history of video art and experimental cinema in Finland 1933-1998") -- edited by Kirsi Väkiparta, lavishly illustrated and published by Kuvataiteen keskusarkisto (Central Art Archives of Finnish National Gallery) -- is the first attempt to trace the complete history of Finnish media art in cinema and video. The book features such writers as film director Mika Taanila, researchers Hannu Eerikäinen and Kari Yli-Annala, and Perttu Rastas, who has specialized in video and media art since the mid-80s.

As the starting point of Finnish experimental cinema Mika Taanila has chosen Armas Jokinen's surrealistic short film Vappuhumua of 1933. A major name here must be the visual artist Eino Ruutsalo, who created in 1962-67 his experimental shorts where he painted and wrote directly to film, scratched it and pinned holes to it. Ruutsalo's films -- in their visual narrative not so different from some modern music videos, in fact -- featured music and sounds from such people as jazz composer Henrik Otto Donner and electronic music pioneer Erkki Kurenniemi (who also created some experimental film works of his own). The underground rock culture of the late 60s brought along a new generation of cinematic experimentalists, when such people as Peter Widén of The Sperm group showed his films on the band's gigs, often intending to shock and provoke; Taanila notifies that most of these works have sadly disappeared now.

What remains of Widén's works is a fifteen minutes excerpt of Suomen Talvisota (1970), documenting the band rehearsals of Suomen Talvisota 1939-1940, a controversial rock/performance group featuring such luminaries of Finnish underground as M.A. Numminen. The group members and poets Markku Into and the late Jarkko Laine are seen in the film; also Finland's legendary President Urho Kekkonen is featured here, laying the cornerstone for Helsinki's Finlandia Hall in the cross-cut film excerpts!

Also Timo Aarniala, these days best known as the underground comics artist and for his record sleeves (Underground-Rock by Suomen Talvisota 1939-1940 of 1970 probably being the most famous of them) did his share in the field of experimental cinema: among those works a 1968 short consisting of nothing else but the ever-repeating loop of the 20th Century Fox logo and that familiar fanfare... in music, J.O. Mallander's famous 'Kekkonen' (also 1968) perused exactly the same minimalist idea.

The late 70s punk movement inspired in Finland such experimental film-makers as Pasi "Sleeping" Myllymäki, working in Super-8 format. Myllymäki, born in 1950, was about a decade older than the punk generation but was especially excited with its fanzine boom; also editing his own zine Maanalainen kaitaelokuva ("Underground Super-8 Cinema"). He was to create nearly 50 short films in between the years 1976 and 1985.

Any acclaim for the works of Myllymäki and his collaborator Risto Laakkonen was slow in coming, but finally ten of these films were taken to the collection of Stockholm's Museum of Modern Art, and receiving screenings also around Europe and United States. However, by the mid-1980s Myllymäki's interest in experimental cinema started to wane.

This was also the era when video gradually started to replace film as the favourite medium of experimental artists, being cheaper to use -- and of course, being recyclable. (Perttu Rastas adds, though, that there were some Finnish experiments in video already in the 1960s and 70s.)

Of the later experimental film/video works a mention is deserved to such creators as Taanila himself, Ilppo Pohjola and Eija-Liisa Ahtila (at the moment internationally one of the most acclaimed Finnish visual artists whose Love Is A Treasure (2002) is even featured in the collections of MoMA); also to Sami van Ingen, Seppo Renvall, Veli Granö, Teemu Mäki, Anneli Nygren, Mox Mäkelä, Marikki Hakola, Matias Keskinen, Mikko Maasalo… and the team of Jimi Tenor (better known as a musician, of course) and Jusu Lounela, with their notorious forays into bad taste with such works as Urinator and Dr. Abortenstein.

Is any of that stuff available on DVDs or DVD-rs...? Sounds like this is all ripe for rediscovery...!

The works of Mika Taanila and Ilppo Pohjola are available on DVD, and I think Eija-Liisa Ahtila's video works are probably too. Some of Erkki Kurenniemi's films are available as the bonus files on the DVD's release of "ThE Future Is Not What It Used To Be" documentary. As for the rest, it might be harder to find any official releases, at least (don't know about any hand-to-hand bootlegs, though). There was originally supposed to be a DVD companion to "Sähkömetsä" book, but obviously some copyright issues barred that... (If anyone knows more, please inform pHinnWeb.)

Hi there! Thanks for the info...! I shall try and check some of this out...cheers!