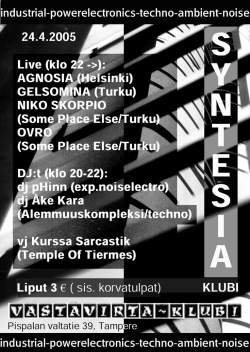 Vastavirta-klubi is a small club in Pispala district of Tampere.

Pispala, a hill between lake Näsijärvi and lake Pyhäjärvi, was in the old times known as the living area of working class people, and it has spawned many famous Finnish poets and writers such as Lauri Viita and Hannu Salama, creating a heavy bohemian air for the area. Lately, this reputation has crumbled quite a bit, since Pispala has more and more become a dwelling place for the nouveau riche, and the prices of real estate have risen rapidly.

Nevertheless, Vastavirta, a club run for some time by a coop of the same name, has done its best to retain some of the traditional Pispala boho spirit. Mostly Vastavirta-klubi, situated almost next to Pispala's landmark, Haulitorni, has hosted gigs for local and visiting punk bands, but lately local electronic underground has also found a home there, with such clubs as Swäg and now Syntesia, which calls "industrial-powerelectronics-techno-ambient-noise" its agenda.

I was asked some time ago by one of Syntesia's co-organisers Sarianna Tamminen a.k.a. VJ Kurssa Sarcastik a.k.a. Sarkku (a gifted graphic artist, by the way, who has designed visuals for the industrial band Temple of Tiermes) if I was interested to DJ at their club. I told Sarkku that of course I was interested, and last night I had an hour's DJ set at Vastavirta.

So, the first Syntesia club took place on Sunday 24 April 2005. We arrived there with the organisers Jari and Sepi in their Hiace some time after 7 pm. The soundchecks were already on. As I came in, a cover version of The Stooges' 'Search and Destroy' was playing, and I gazed around a bit. Some counterculture sort of people seemed to be hanging around, young and old punks and art school student type of people, enjoying their teas, beers and the orangeish spring evening sun shedding in its warm glow from the club's large windows. There was a long saloon-type of bar counter, comfortable-looking lodges for punters, with a bookshelf consisting of underground culture books and fanzines and a computer in a corner where I checked out the latest Viagra and penis enlargement spam in my mailbox. The stage seemed not to be too big, but large enough for these underground sort of events.

I played after DJ Åke Kara whose repertoire consisted mostly of 90s minimal Detroit sort of techno. I remembered this guy from last July's Lavatanssit party in Nokia's forests. Well, now it was fun to spin some different sort of material I can't normally play at my usual electro events, such as noise and experimental. I normally fuss a really lot about my beatmatching skills (or lack thereof), but this time it was great just to create these sound collages with two vinyl players, two CD players and a mixer, and mix it all together as one wonderful chaotic mess, playing all these in sync at the same time. I had this short loop of a woman's orgastic breathing which I played underneath all that stuff (maybe I overplayed the loop a bit, but it was springtime after all), a set consisting of Virtalähde, Kid606, Speed Freak, Merzbow, Speedranch^Jansky Noise, Atari Teenage Riot, DJ Bug's raggacore, Erkki Salmenhaara's musique concrète, The Sperm, Throbbing Gristle; and such pop turds as Kata Kärkkäinen's unforgettable 1989 hit "Your Love Ain't Good Enough For Me" (with its memorable "äy-äy" chorus) and of course the queen of pop we all love to hate, Madonna (fuck your way to the top even if you can't sing a bit, become an ubiquitous media celebrity and even a feminist icon -- empress's new clothes for the clueless intellectuals desperately trying to be hip -- and see how your "Blonde Ambition" pays off)! And naturally Fredi's classic early-70s FinnHit, 'Kun rakkaus voittaa' ("When Love Wins"), accompanied by Hitler's speech! The set was recorded on MiniDisc and duly archived (the tracklist is here -- ask me if you want a copy of the set).

Of the night's live acts, Agnosia played right after my set; in fact, when they started I found my way out blocked from behind my DJ tables and their gear, so I huddled beneath there for all their gig, which mercifully lasted only for twenty minutes. In fact, it was fun, though, musically they continued about along the same lines with my own DJ set, mixing noise to cheesy old pop hits they played from old vinyls. I wouldn't let these guys near my own record collection, though; after they had done with playing their old records of Finnish yesteryear pop band Mamba and such, they quickly disposed of those vinyl records by hurling them to the floor or breaking them to pieces!

The night was continued by the Turku couple of Ovro and Niko Skorpio, both playing esoteric ambientish material in the spirit of Coil on their laptops. Ovro was a stylish tiny bespectacled girl wearing a black miniskirt, platformish high heel shoes and face hidden under a black baseball cap. Her soundscapes drifted in the air and panned around stereophonically. Then it was Niko Skorpio's turn; a lanky bald-headed guy with glasses, his beard tied in a little ponytail, and wearing a silly-looking pointed cap, as if being some hippie magician, he conjured to the air more magick soundscapes.

As every film puff knows, Gelsomina is the tragic female character played by Giulietta Masina in Federico Fellini's masterpiece La Strada, lending her name also to this Turku noise act who played next. Appropriately, they started out with Nino Rota's immortal La Strada theme music, which turned then into something far more sinister. All in all, it was a good night.