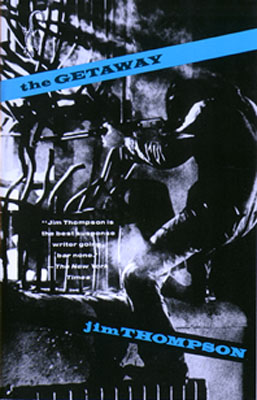 "The story of a bank robbery and its aftermath, of cross and double-cross, told with the unflinching eye of America's greatest crime writer.

When it comes to pulling off the perfect bank job, Doc McCoy wrote the book. But with a partner like Rudy Torrento, who is not only treacherous but insane, and a wife who is still an amateur, McCoy has forgotten something: when the crime is big and bloody enough, there is no such thing as a clean getaway."

Doc McCoy is a psychopath of charming type (and a typical "Right Man" too?), who doesn't flinch to kill anyone trying to get on his way. One can claim he even has a hypnotic hold on his wife Carol, an ex-librarian gone bad. Rudy Torrento, a psychopath of nasty type, is a gruesome end result of lifetime abuse. They leave behind them a trail of corpses, Thompson's hard-hitting prose depicting the unfolding events bleakly but with a great psychological eye.

Filmed by Sam Peckinpah in 1972 starring Steve McQueen and Ali McGraw. Thompson -- also called "the Dostoyevsky of dime store novel" -- himself was initially hired to adapt The Getaway, but was subsequently fired by star Steve McQueen who deemed his style too depressing (in the film Doc and Carol are more romantic villains à la Bonnie and Clyde than Thompson's original murderous and calculating psychopaths). As result, the film is still an entertaining action movie, but misses the real grist of Thompson's novel. Cathi Unsworth writes in the Bizarre magazine: "The Getaway, the novel, begins as a routine caper and ends, steeped in a sense of Biblical retribution, with its bank robber protagonists Doc and Carol McCoy trapped in the Mexican purgatory of El Rey, having previously lain low in underground caves and a room made from shit. It wasn't an ending McQueen was likely to relish."

Excerpts from the book:

Flight is many things. Something clean and swift, like a bird skimming across the sky. Or something filthy and crawling; a series of crablike movements through figurative and literal slime, a process of creeping ahead, jumping sideways, running backwards.

It is sleeping in fields and river bottoms. It is bellying for miles along an irrigation ditch. It is back roads, spur railroad lines, the tailgate of a wildcat truck, a stolen car and a dead couple in lovers' lane. It is food pilfered from freight cars, garments taken from clotheslines; robbery and murder, sweat and blood. The complex made simple by the alchemy of necessity.

You cannot do what you must unaided. So throughout your struggling, your creeping and running, your thieving and killing, you are on the hunt for help. And if you live, you find it, sooner or later.

Doc knew people; and having been born among them, he knew this kind very well. Their existence was centered around existing. They had no hope of anything more, no comprehension that there might be anything more. In a sense they were an autonomous body, functioning within society which was organised to grind them down. The law did not protect them; for them it was merely an instrument of harassment, a means of moving them on when it was against their interest to move, or detaining them where it was to their disadvantage to stay.

Doc knew them well. He knew how to talk to them.

Her mind moved around and around the subject, moving with a kind of fuzzy firmness. With no coherent thought process, she arrived at a conviction -- a habit with the basically insecure; an insecurity whose seeds are invariably planted earlier, in under- or overprotectiveness, in a distrust of parental authority which becomes all authority. It can later, with maturity -- a flexible concept -- be laughed away, dispelled by determined clear thinking. Or it can be encouraged by self-abusive resentment and brooding self-pity. It can grow ever greater until the original authority becomes intolerable, and a change becomes imperative. Not to a radical one in thinking, that would be too troublesome, too painful. The change is simply to authority in another guise which, in time, and under any great stress, must be distrusted and resented even more than the first.

The Killer Beside Me: The Jim Thompson resource page

The Getaway has for long been the favourite Thompson for me. It has something to do with the fact that the book is also the most competently written of all the books he did, but also because the schizophrenia is so near.