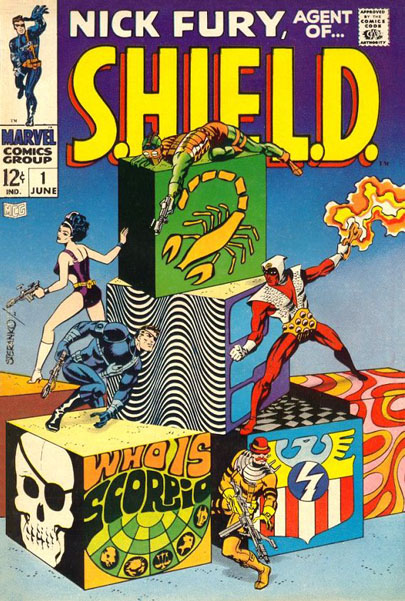 The very first issue of Nick Fury's own title with psychedelic lettering and patterns. 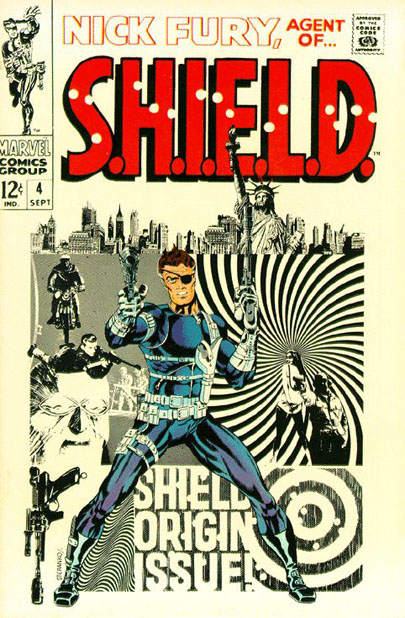 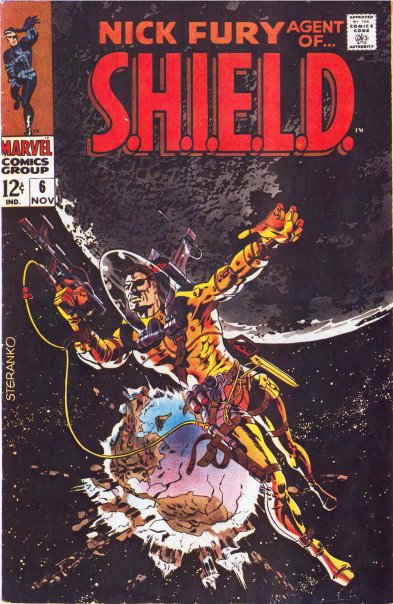 A striking science fiction cover; too bad the story inside was not by Steranko and had nothing to do with the sleeve art. 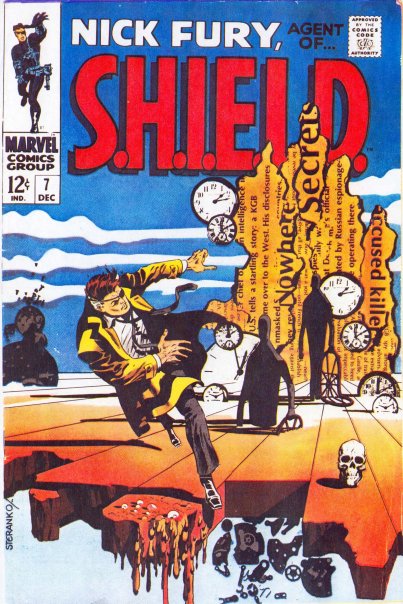 A surrealist art-inspired cover also reminiscing the films of Alfred Hitchcock (who, in fact, collaborated with Salvador Dalí for Spellbound.)
Through Facebook, I recently got hooked up again with Canadian Tony Robertson, who maintains an excellent tribute site to American comic book artist and illustrator Jim Steranko. As a fan of the artist's work, I used to host my own Steranko tribute under pHinnWeb during the late-90s, but eventually gave up the site (partly because of worrying about the copyright issues) and let Tony "adopt" for his own site the Steranko-related material I had gathered together so far (including the 1983 Amazing Heroes and 1989 Betty Pages feature stories on Steranko).

James "Jim" Steranko (b. 1938), known in the industry only as Steranko, is best known for his take on the Marvel Comics character Nick Fury -- who started his life as a WWII hero Sgt. Fury, now promoted to the rank of Colonel as the head of a spy organization S.H.I.E.L.D., wearing a futuristic jumpsuit and also rejuvenated with a mystical youth serum -- which started in 1965 through Strange Tales magazine; the character receiving his own title, Nick Fury: Agent of S.H.I.E.L.D, in 1968. S.H.I.E.L.D. (Supreme Headquarters International Espionage Law-enforcement Division) was inspired by other fictional spy organizations like U.N.C.L.E. (of the TV show Man from U.N.C.L.E.), when Marvel Comics decided to jump in to the secret agent craze popular in the mid-60s after the phenomenal success of James Bond movies.

For Nick Fury, Steranko developed a totally new flashy narrative style he called "Zap Art", based on the groundwork made by Marvel stalwart Jack Kirby and then further inspired by psychedelia, OP art and surrealism. Marvel Comics titles such as The Fantastic Four and Dr. Strange had already appealed to the hippie generation with their spectacular cosmic visions, and Steranko was consciously to apply to his own works the psychedelic visual style familiar from the rock posters and record covers of the era. Also Will Eisner's Spirit and Eisner's cinematic photomontage-like style of "consequential art" informed Steranko; furthermore, the influence of classic comic book illustrators like Hal Foster of Prince Valiant (large splash pages with long descriptive text captions) and Russ Manning's (Tarzan and Magnus, Robot Fighter) fantasy landscapes were there, also Wally Wood's striking style Wood used in his horror and sci-fi comics. As a writer Steranko ofter favoured elliptical narratives with theatrical pulp fiction style drawing inspiration from hard-boiled crime fiction, sci-fi and even Gothic horror style.

Steranko, who also had worked as a stage magician, was fascinated by all sorts of games and complicated labyrinth designs, so Nick Fury was seen adventuring in several intricate (and psychedelic) mazes the arch-villains like Hydra had set up for him. The dialogue, with Nick Fury's hard-nut war veteran/bar brawl "Brooklynese", with tough-guy expressions like "flapping one's gums" (= talking too much), sounds now often comically corny and contrived, but hey, isn't that the case, too, when reading also other Marvel titles of the era? Anyway, Steranko might be remembered as a great "postmodern" synthesist, who combined different existing styles to create his own visual narrative (and in his turn influenced other artists like French Philippe Druillet, who took Steranko's psychedelic OP art style and used it for his own byzanthine Lone Sloane in the 70s).

Steranko's hectic working schedule for Marvel took its toll and he finally left the company in 1969. After that he worked briefly for some horror and romance comics titles of other publishers, before establishing his own Supergraphics company, which published two volumes of The Steranko History of Comics in 1970 and 1972, also the magazine Comixscene, which then evolved into Mediascene and finally Prevue, lasting until 1994. 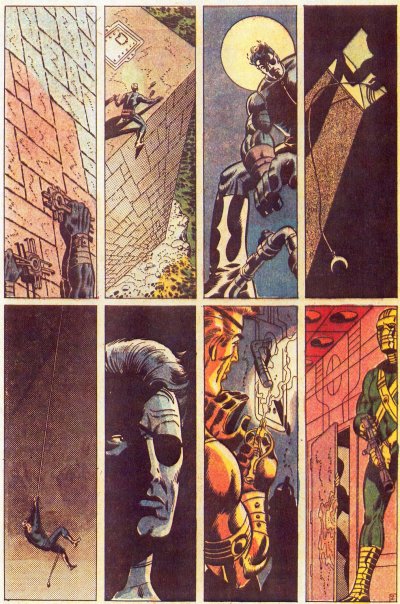 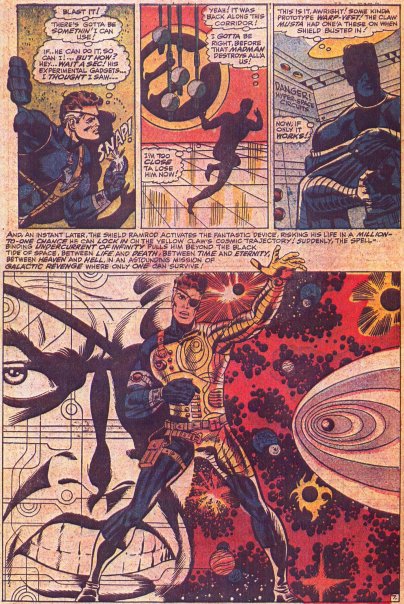 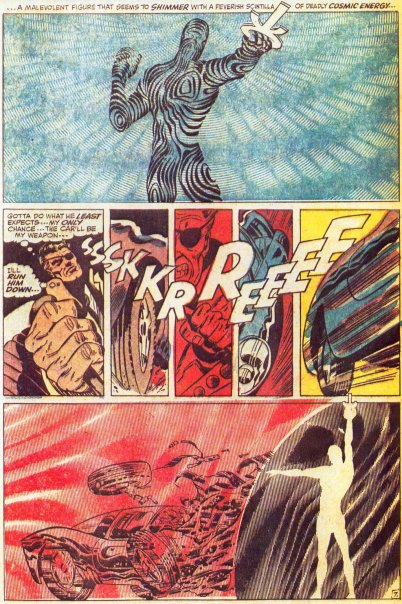 For more on Steranko, check both Wikipedia and Tony's site for countless examples of Steranko's art.

The uncensored illustration of Nick Fury's girlfriend Countess Valentina. Marvel Comics, in their infinite wisdom, blackened out in the published version the curvy details of La Contessa's buttocks, perhaps thinking they would be too much for the imaginations of the boy readers who had just entered their puberty...
Posted by pHinn at 2:28 PM
Labels: 1960s, cinema, comic books, comics, design, graphic design, hard-boiled, Marvel Comics, OP art, pop art, psychedelia, science fiction, Steranko