The Seeds: 'Can't Seem To Make You Mine


The Seeds: 'Two Fingers Pointing on You' (off Psych-Out, directed by Richard Rush, 1968)

Sky "Sunlight" Saxon, the singer and leader of the seminal psychedelic garage rock band The Seeds died on Wednesday 25 June 2009.

* He was reported to be 63 years old, though some sources differ on his actual age.

Finnish CD-R label Luovaja delighted me with three fresh releases from their roster; two of them of Finnish origins, one from Russia.

Paanpa is the singer–songwriter–multi-instrumentalist Pasi Palonen from Tampere. His home-grown electropop draws comparisons to such Finnish luminaries as Risto and TV-Resistori. Vega Stereo is vintage analogue ambient from the Moscow duo of Alexey and Nastya. Bearly Queen is a one-man ambient project of Heikki Kippola (also known for his Palasokeri prog and Krautrock page) from Oulu. Follow the links to sound samples, further info and how to order. 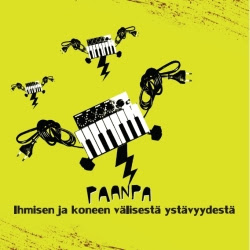 Can a machine feel love? Can even a human being feel love? Can a human and a machine ever find each other, romantically? What about an intimate relationship between flesh and cold, cold metal? These are important questions of which no-one has ever written even a doctoral thesis(!).

As a human being, as a machine of flesh, I've been coded with these biological scripts that cause us to feel crush, hate, the need to touch and be touched, the ability to feel sorrow and even so-called love - these are emotions, electrical phenomena going on in the brain, that man has located and given them names. These are the days of making a consumer product from every basic need man has, so that these needs can be sold for example as part of TV's programme flow or as a sex shop's services (not to mention all those dating sites over the Internet).

The world we try to perceive every day is after all created by man. Man has also created every machine and every human being of today. Form is discretion, and there is no soul... So, I make a profound question: Is there really a difference between a creature grown in a womb and a machine, built up piece by piece in a factory? These both creations have (in most cases) some sort of an operating system with some sub programs.

As an individual raised by science fiction literature, I strongly feel the urge to ask, to speculate about the thing called 'reality'. I do not expect getting neutral answers, if any. I also feel that pop music is as good a format to make these questions as a scientific (or a science fiction) publication is.

I have been honoured to feel a machine kind of love, to be a guinea pig for a sadistic dentist's dark fantasies, to mourn my own loneliness, and between all of this I've been conceiving and amending my own views of this planet, Earth.

I recorded this record in my bedroom where I also wrote most of the songs. When Jaakob Karhu contacted me about making this CD-R, about half of the songs existed in a form or another. Quickly I understood what it was going to be, even if my songs tend to take a direction of their own and crawl out of my reach. If I believe in something, it is that things tend to work out somehow - may the results be for good or bad. This happened to 'Ihmisen ja koneen välisestä ystävyydestä', too. 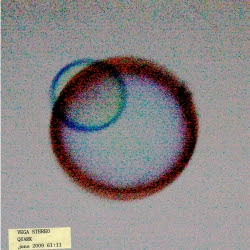 Long suite of hypnotic ambient landscapes, electronic minimalism and relaxed floating through soft spaces of colors – created with vintage analog synthesizers. The other member of this mysterious Russian duo is also known for his project Analog Concept. 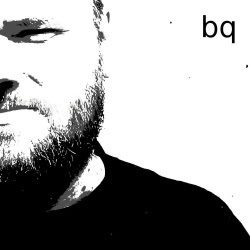 Even though the title of the previous album may have suggested otherwise BQ hasn't split up. There was some hesitation however if the next album should be something different. After working awhile simultaneously with two different tracks BQ soon realised that these two songs were not ment to be together on the same album. Both needed more space and time. The spacier of the two caught more attension because it had the spirit BQ had been searching for; this could be BQ's Atem? So instead of something different you get more of that familiar slow and dark BQ sound you have learned to love. Better luck next time. Maybe.

Ian Loveday a.k.a. Eon In Memoriam

Ian Loveday a.k.a. Eon, a legendary British electronic dance music producer, passed away on Wednesday June 17 from complications with pneumonia at the age of 54. Loveday was known for such rave tunes as 'Spice' (1990) and 'Fear The Mind Killer' (1991), and the album Void Dweller (1992). He also recorded under such monikers as Minimal Man, Tan Ru and R. Rash. I interviewed Ian Loveday for pHinnWeb in 2002, through his connection with J Saul Kane's Electron Industries label, for which Eon released such 12"s as 'Wave Angel' (1995) and 'Phaze Test' (1996). Rest in peace.

The Chicks have been busy in the last 2 years, filming video, making art installations, Girl Monster extravaganzas, reading books, exhibiting all over the planet, making patchwork fashion collections (for Insight, Crystal Ball and Yoox.com), building high heeled shoe guitars, high tech Super suits that trigger sound and video and other Objekt instruments ... AND THEY EVEN FOUND THE TIME TO MAKE THIS NEW RECORD!

The studios, where the album was made, included hotel rooms, trains, bathrooms in cellars of art galleries, over Skype and live recordings taken from their Art Rules performances @ MoMA and Centre Pompidou.

The songs range from self-referencing pieces, like “Art Rules” and “Extended Paintbrush”, full of insider information and irony, poking fun at the art world (to encourage people to be courageous and humorous) 60’s bubble gum pop “BUZZ”, which is all about the lost glamour of flying, Fassbinder inspired “Black and White Diva” featuring Kiki Moorse, who departed the group 2 years ago, to persue a solo career. “Sewing Machine” came about after the Chicks found a photo of themselves in El Pais crediting them as being Kraftwerk on stage. “Vibrator” ended up sounding so B52’s-ish that the Chicks just had to call up Fred Schneider. And yes, the recording happened over Skype.

The "Objekt Instruments" are the newest addiction the Chicks on Speed have, they’re the ultimate culmination of fashion, performance and wearable sculptural art, taking advantage of the latest technological developments in science and new media. Most of the songs on the album have been created by using the "Objekt Instruments"; amplified rocks, a high heeled shoe guitar, sax going through a guitar amp, plucking a gutted Piano, and the inspiration for the album title, the scissors.

Watch out for these "Objekt Instruments" handmade by the Chicks @ the new COS live shows and exhibitions the world over.
Oh and by the way, experimentalism has never sounded so Pop!

CUTTING THE EDGE
Chicks on Speed are Melissa Logan and Alex Murray-Leslie who've conspired together since they ran their illegal bar together, behind the Munich Art Academy in the late 90s.You can try this at home. Sew these ingredients together and you got Chicks On Speed's happy white girl howling surprise of a fifth album, "Cutting The Edge":
1) Take a lot of art and heart and make it smart with catchy, scratchy melodies and pithy, echoey words that lacerate and negotiate the crazy state of human play. Primp and prep primary popping colors and lock them down with hooks that click tight, in saucy, defiant songs that spin you across the shiny dancefloors of your mind.
2) Make tunes that matter. Dramas and meditations in pop song form. Vibrator, whose B52's panache lured that band's Fred Schneider to join its sexy romp. Super Surfer Girls' funny beach fantasies; Art Rules Pop's scalding satire of art's money dance; Sew- ing Machine's found sounds from the sweatshop and inter-linguistic lyrics, the provocative textures of Extended Paint- brush's bouncy hedonistic agit-pop; the sheer provocation of Sex In Der Stadt's recycling porn ads; and the title track's timeless question - Are you fake? Or are you real?
3) Choose your collaborators wisely. You must trust them abso- lutely. We're talking serious threats like Mark Stewart; Anat Ben-David, Joe Robinson, Douglas Gordon, A.L. Steiner, Kathi Glas, Christopher Just, Fred Schneider, Gerhardt Potuznik, Patrick Pulsinger and especially UK Super producer team A Scholar and Physician.
4) Work across nations and oceans with tools like Skype and OBJEKT instruments you make yourself - amplified rocks, guitars like stiletto heels, saxophone warbling through guitar amps, piano strings plucked by hand.
5) Wear your own designs of "super suits" that trigger sound and video, made of futuristic textiles with ancient cat's eyes that see into the present.
6) Let a smorgasbrod of symbols slash expectations as you smash the grey part- itions between art, fashion, music, museums, government, industry and the way you choose to live your life & dreams.
7) Don't forget the scissors, just as effective as a big bass drum, cutting you off from what you want to leave behind and giving this record its name.
8) Add a dash of heartbreak, hilarity and wicked insight.
9) Record on the run, in hotel rooms, trains, bathrooms in cellars of global art galleries, over Skype and live on stage at Art Rules performances at MOMA in New York and the Centre Pompidiou in Paris.
10) Keep stitching. The departure of Kiki Moore after their last album two years ago, caused soul-searching. Would the Chicks survive? But COS's exuberant art needs kept them flinging their own glitter. Feel it? It's our time to shine. Fuck off, vampires, it's too late.
by Vivien Goldman

Vivien Goldman is a writer, broadcaster and musician whose post-punk cult classic 'Launderette' is re-issued on COS's Girl Monster. Her fifth book is The Book of Exodus: the Making and Meaning of Bob Marley and the Wailers' Album of the Century. Known as The Punk Professor, she also teaches Reggae courses at NYU and writes for the New York Times, the New Statesman, the Observer and many more.

Chicks on Speed on Style.it

Kompleksi's April 2009 interview in Basso can be now read as an English version.

The original interview in Finnish is here.

And there's also the complete, unabridged raw version in Finnish.

Thanks to Taru the interviewer and Risto @ Basso! 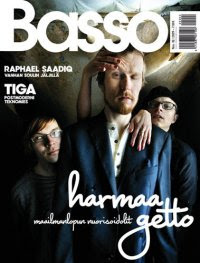 Posted by pHinn at 3:00 PM No comments:
Labels: interviews, Kompleksi 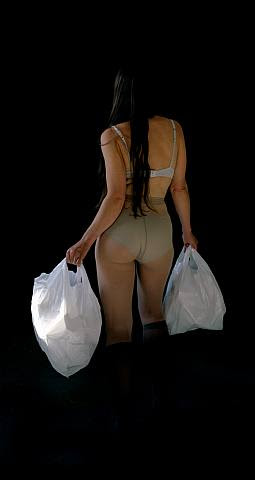 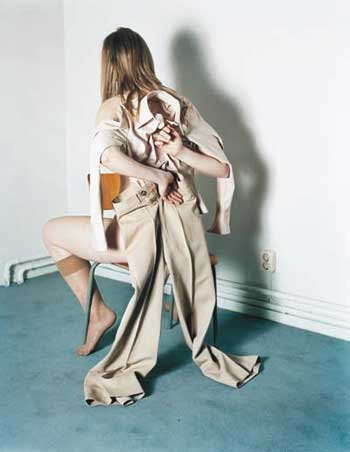 Big Jim Sullivan (b. 1941) is a British guitarist and session musician, who also learned to play the sitar under the guidance of Vilayat Khan and released two albums of sitar music. Sullivan provided the eerie improvisation with the Coral sitar for the Space: 1999 episode "The Troubled Spirit" (1974). Space: 1999 Theme by Geoff Love and His Orchestra

Can Anyone Recognize This Video?

From YouTube: "A very obscure early 80's video in the vein of The Residents. Does anyone know who the artist is and the name of the song? It has been driving me crazy for years!"

thanks for the swift answer, Superjohan! So, the track is 'B' by Colin Newman (of Wire fame), released as a 7" and on his album A-Z (both on Beggars Banquet) in 1980.