Posted by pHinn at 3:16 PM 1 comment:
Labels: Chicks on Speed

And another forthcoming Skweee release... 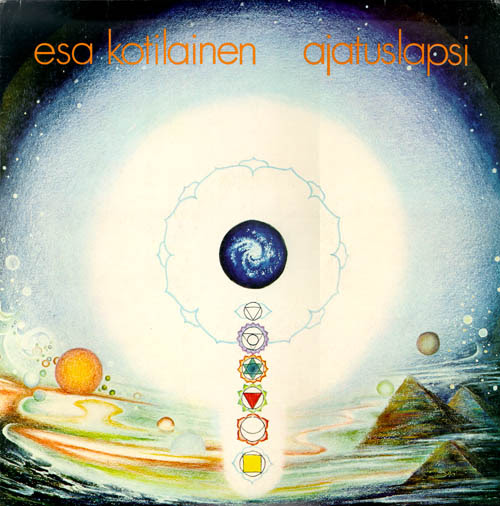 A treat for electronic ambient fans is provided by a long-awaited CD re-release of Esa Kotilainen's Tangerine Dream/Klaus Schulze-style solo album Ajatuslapsi ("A Thought Child") from 1977, which is now out on Love/Siboney, a company specializing in CD re-releases of the legendary Finnish label Love Records, which went bankrupt in 1979, leaving behind a large legacy in Finnnish rock, jazz, folk and also political music.

The album was originally released as an edition of 500 copies, Kotilainen playing all instruments there. Alongside Tangerine Dream, Lobsang Rampa's controversial book The Third Eye is mentioned as its inspiration, Kotilainen visualising such tracks as 'Avartuva näkemys' as a journey of Tibetan monks in a cave of stalactites.


Esa Kotilainen in 1979, introducing the electronic sounds of Moog

Esa Kotilainen (b. 1946) is known as a keyboard wizard and synth veteran, who provided his contributions to Wigwam's most popular album Nuclear Nightclub (1975), also as a member of the band's latest incarnation, which is still in business. Furthermore, Kotilainen has provided his services as a session musician for such as Tasavallan Presidentti, Jukka Tolonen, Hector, J. Karjalainen, Nils-Aslak Valkeapää and many more. He has also been a member of Neum.

Esa Kotilainen's career in electronic music started in 1974 when he expensively imported from Germany a MiniMoog, an instrument rarely seen in Finland those days. During this era Kotilainen was playing gigs on a ferry called Finnhansa, which sailed between Helsinki and Travemünde, and paid for the instrument 6.100 Finnish marks: the price of a small car those days. The first gig with Kotilainen's Minimoog was creating sound effects for the soundtrack of Spede Pasanen's film comedy Viu-hah-hah-taja (1974), and the first music recording was obviously for the solo album Robson of Frank Robson.

Kotilainen's new career as a synth wiz got him loads of offers for background music in commercials after which his career was guaranteed in progressive bands like Wigwam, who were after electronic sounds generally favoured by the prog genre. Kotilainen is also said to have in his collection a Mellotron (an analogue predecessor of samplers, using pre-recorded tape loops played with a keyboard), perhaps the only one in this country.

Ajatuslapsi CD features as bonus tracks two versions of 'Matkaaja' ("The Traveller"), a 1978 commissioned work from Kotilainen for the Finnish National Ballet. The CD booklet also includes English liner notes by Pekka Laine, where Esa Kotilainen shares his insights on the album's origins. 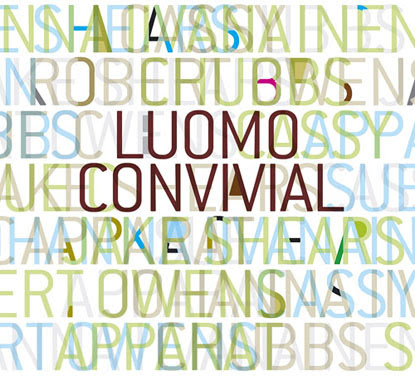 You can read more on album at Luomo site; with reviews, interviews and the free 'Love you all' track featuring Sascha Ring a.k.a. Apparat. 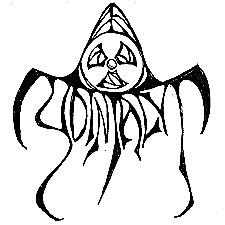 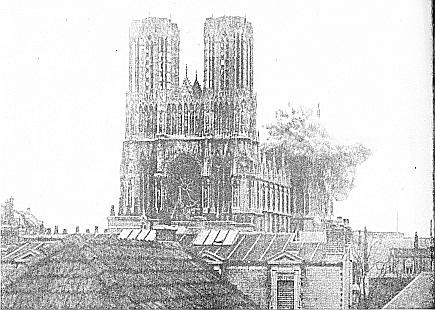 Ydintalvi ("Nuclear winter") is a Sonic Temple Assassins-related project, which classifies on its MySpace page as "hardcore / black metal / industrial".

And yet another forthcoming DC Recordings release...

Arcadion is the new incarnation of Alan Dobson, also known as Hungryghost (with releases coming soon on Nightmares On Wax's 'Wax On' imprint) and as an erstwhile member of scratch DJ and production team Def Tex. A resident of Norfolk and more recently London, Dobson's musical journey has taken him from a childhood of dub, blue beat records and Norfolk ditch-jumping via an obsession with computer technology and sampling to arrive at the swaggering electro boogie that you find on this debut release for DC Recordings.

The title track "Ghost Feeder" comes on like a modern take on the go-go music of Trouble Funk or Tilt, following the tradition of dancefloor music fostered by Depth Charge in his formative years and therefore fitting neatly on the DC roster. These are beats aimed squarely at your pelvis with an aim to make the party move, coming to you here in their most refined and pneumatic form.

Second track "Arc" delivers more of the same quality but utilises the motifs of electro boogie -- lilting electronic melodies riding a heavyweight percussive groove, augmented by the sound of vintage synths like the Octave Kitten and the Cheetah MS6, which bring a classic edge to this dancefloor pulse, creating flavours reminiscent of Bambaataa and early New York electro at its most futuristic!

Our debut gig (and also the official record release party) on Friday 3 October 2008 is now online -- with warts and all (as Kate Bush put it: be kind to our mistakes) -- divided into eight videofiles. The gig was filmed by Tina Ulevik of Spul Films Australia, who also created the music video for our 'Sara Pain' in 2007.

This gig took place at Lal Lal Lal Festival, organised by Lal Lal Lal record label which also released our first single back in 2005. The venue was the cellar of Kantis in Helsinki, a British-style pub/restaurant.

You can order the album directly from Verdura Records.

The album is distributed in Finland by Supersounds Music.

And this is what Supersounds tells about the release:

I will add later on more info about the shops where to get it and also the international distribution that is in plans too. For now, you can find the album for example at If Society Shop, Pitkämies, CD-Kauppa.Fi and Levyliiga.

And the digital version (with a bit different track order and slightly longer versions of some tracks) can still be bought from Beatport.

Meanwhile, if you live outside of Finland and want to get your hands on the album now, I recommend you contact Verdura directly for more. It's a shining black vinyl with a limited edition of 500, so act while the stock lasts!

Also, the video of our debut gig of 3 October at Lal Lal Lal Festival (Kantis, Helsinki) can be seen at YouTube now.

American photographer William Claxton (12 October 1927 - 11 October 2008) has passed away. Claxton was known for the book Jazz Life, featuring a series of photographs of noted jazz musicians he took from his travels around the USA in 1959 and 1960 with musicologist Joachim Berendt. 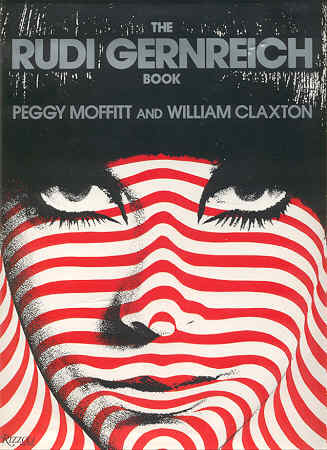 William Claxton was married to Peggy Moffitt, one of the iconic and often-imitated 1960s models in fashion photography and a muse to fashion designer Rudi Gernreich (1922 - 1985): Claxton's photographs of Moffitt in Gernreich's designs became world-famous.

("The Iron Age", an expensive TV production based on Finnish national epic Kalevala and written by Haavikko.)

Paavo Haavikko, a Finnish Academy member and one of the most prominent Modernist poets and writers in Finland has passed away. Haavikko was also a playwright, essayist, book publisher and an avid social commentator.

See what those crazy kids are up to at Yo-Talo these days, with DJs Infekto & Sami running the show in their guaranteed style. (I haven't been there myself in ages; having been too tired, exhausted & f*ked-up lately, but it seems the scene is pretty much the same as it always was).

... And more the same from the last year.

Also, a live rendition of Regina's new single 'Saanko jäädä yöksi?' ("May I stay for the night?"). Actually, Regina are based in Helsinki these days, but they started out here in Tampere, so I guess they can pass now.

And finally, I just found this new-ish site on Tampere's current street fashion: Tampere Street Style. It seems to have been modelled after Hel Looks, a similar site on Helsinki styles.
Posted by pHinn at 2:02 PM 1 comment:
Labels: fashion, Regina, Tampere, Yo-Talo

As you can see, most of these are still library records; many of which I just check out of curiosity. For example, the Quatermass record had an intriguing sleeve image, so I had to find out what that was all about. It was quite Emerson, Lake & Palmer type of prog rock; well-made stuff in its own style, but not quite my own thing. So, maybe all of these are not exactly my own big favourites; the chart only being a sort of log what I've been listening to every month. Of course there would be more
12"s and current electronic stuff if I only had money to invest in them these days (Stereolab and Sparks CDs are actually the only record store purchases I've made in a long time, and Kelpe being a DC Recordings promo CD), and I haven't been DJing in ages, really, so getting huge amounts of new vinyl doesn't feel as relevant now as it used to be.
Posted by pHinn at 1:03 PM 1 comment:
Labels: charts, pHinnWeb
Newer Posts Older Posts Home
Subscribe to: Posts (Atom)